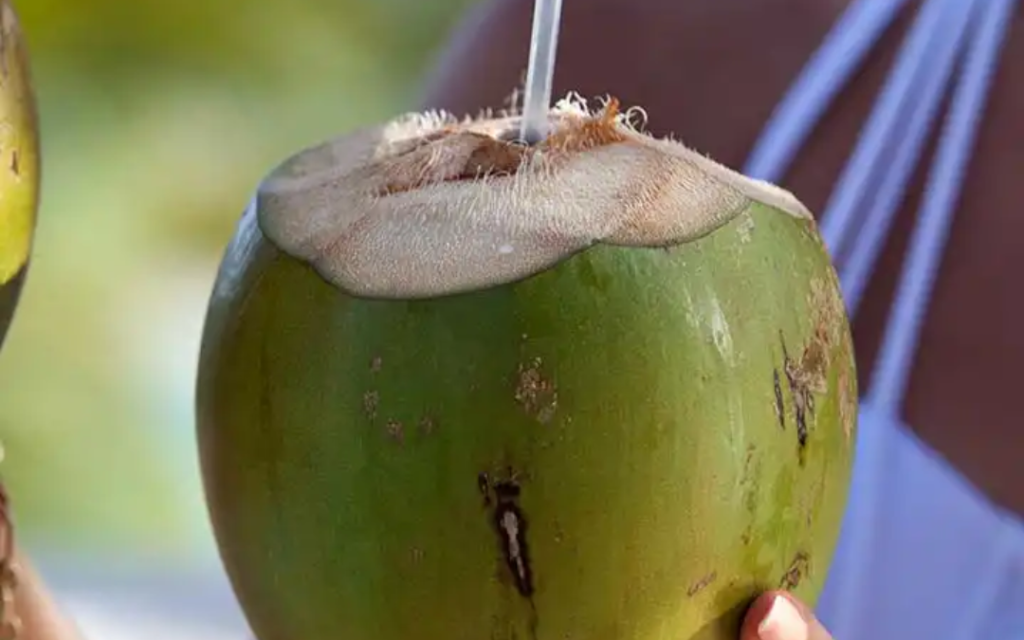 Coconut water in recent years have become trendy drink. It burst onto the scene and into the fridge. Coconut water is touted as miracle drink. There are claims that it can improve athletic performance and boost weight loss.

What is Coconut Water

Coconut water is the clear liquid inside green and immature coconuts. Younger coconuts are favoured for their water as it is tastier, easier to access by chopping the top of the shell and plenty of water in volume.

As the coconuts mature, some of the water remains in liquid form. The rest ripens into the solid white flesh that is known as coconut meat. Mature coconut will have a harder husk and less water.

Different varieties of coconuts may slightly vary in taste, and yields. This also depends on where the coconuts are grown. Coconut water is different to coconut milk or coconut oil in taste and nutrition. Coconut milk and oil are made from mature coconut flesh. The coconut water forms naturally and contains 94% water and very little fats.

On average one young coconut may yield 240ml of coconut water containing 46 calories. It may have 9g carbs, 3g fibre and 2g protein. Furthermore, it has recommended daily intake of the following nutrients – 10% vitamin C, 15% magnesium, 17% manganese, 17% potassium, 11% sodium and 6% calcium.

When there are too many free radicals, your body enters a state of oxidative stress. This can damage your cells and increase disease risk. Free radicals are unstable molecules produced in your cells during metabolism. Their production may increase in response to stress and injury.

However, more controlled studies may be needed to confirm these effects in humans. Nevertheless, with 3 grams of fibre and a digestible carb content of only 6 grams per 240 ml, coconut water can easily fit into planned meal for a diabetic. Coconut water is also a good source of magnesium which may increase insulin sensitivity. Therefore, it may reduce blood sugar level.

Drinking plenty of fluids is important for kidney stone prevention. Plain water may be a great choice; however, studies show coconut water may be better. Researchers believe that coconut water helped reduce free radical production that occurred in response to high oxalate levels in urine.

The water is freshest when it comes directly from the coconut. Simply press a straw into the soft part of a green coconut and start drinking. Coconut water is refreshing and nutritious.

You can also buy bottled coconut water at most grocery stores. Once opened, store the coconut water in your refrigerator and consume it within two to three weeks of purchase.

Coconut water is slightly sweet with a subtle, nutty flavour that you will love. It’s also fairly low in calories and carbs. Coconut water may be the perfect beverage for restoring hydration and replenishing electrolytes lost during exercise.

Coconut water is a low-calorie drink compared to sugary fizzy drinks or juices. However, it is not calorie-free like plain water. The claims that drinking coconut water increases metabolism are not yet backed up by research.