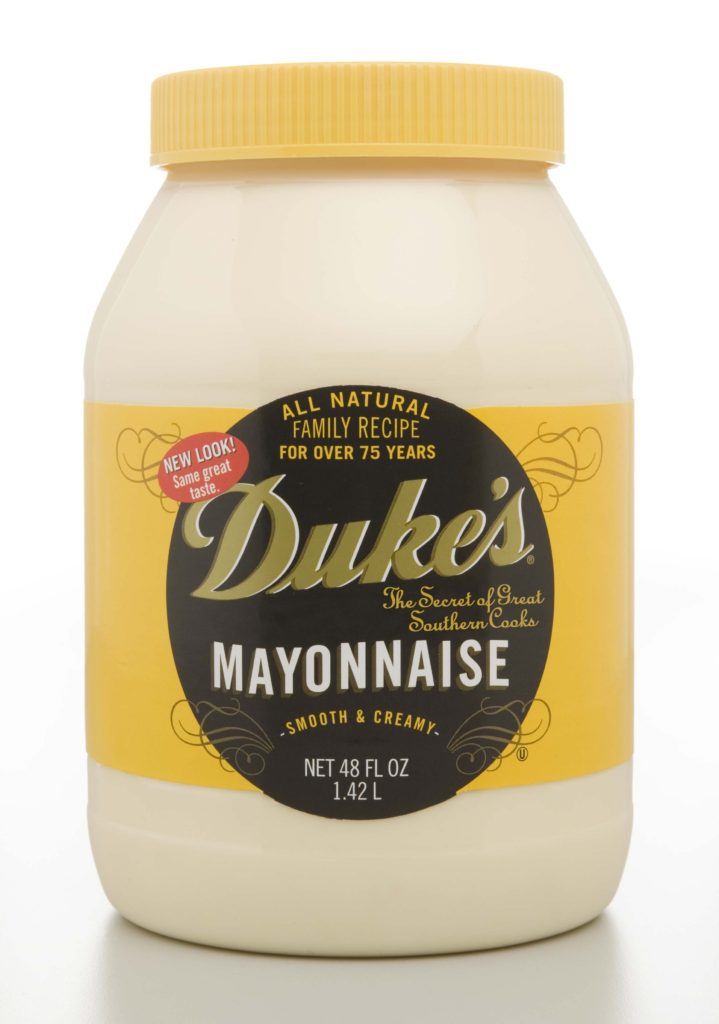 Duke’s mayonnaise is more than just a century-old southern authentic recipe. It is the secret to great food. Duke’s today is one of the largest three mayonnaise brands in the United States. its popularity was at first largely limited to the South. However, today it is not a secret anymore. Duke’s connoisseurs can’t help but spread the word. Everyone is talking about Duke’s mayonnaise.

Duke’s mayonnaise is a delicious condiment that was created by Eugenia Duke in South Carolina in 1917. It is used in regional favourites such as tomato sandwiches, coleslaws, potato salads, pimento cheese and devilled eggs. Eugenia Duke began selling sandwiches slathered with her homemade mayonnaise serving the hungry soldiers in training. Duke’s Mayonnaise legacy began at Camp Sevier. Eugenia’s sandwich business was so successful that on selling her 11,000th sandwich she invested in her first delivery truck. This enabled her to her to distribute her increasingly popular sandwiches to more people than ever before. The special flavour sandwiches were unforgettably delicious.

Eugenia’s classic and simple sandwiches were delicious, but it was her tangy spread that was truly distinctive and kept people wanting more. Hence in 1923 Eugenia’s top salesman Boyd urged Duke to shift her efforts to the mayonnaise that made her sandwiches so flavourful.

As a result of focussing on mayonnaise, Duke began selling her mayonnaise as a separate product. Duke’s Mayonnaise took off and Eugenia sold her sandwich business to her accountant, Hart in order to focus her attention solely on the spread. The sandwich operation, named Duke Sandwich Company, still operates in Greenville today. The sales growth was exponential and by 1929 Eugenia was struggling to keep up with the ever-increasing demand for her famous mayonnaise. Therefore, Eugenia sold the business to The C.F. Sauer Company, another family-owned and operated business. Eugenia served as C.F. Sauer’s mayonnaise spokeswoman. However, eventually Eugenia resigned and moved to California to be closer to her daughter.

Throughout the 1960s, The C.F. Sauer Company continued to grow Duke’s distribution and popularity, developing it into the brand you know and love today.

Duke’s mayonnaise truly has a unique flavour with a smooth and creamy texture that you will love. It contains more egg yolks than any other major mayonnaise brands which makes it rich, creamy, and less likely to separate when heated. Duke’s texture is thicker and almost custard-like instead of simply slick or gelatinous. There is a twist of tang from vinegar and a touch of paprika that gives it a tangy flavour. All of this makes Duke’s look and taste more like home made mayonnaise a wonderful thing that is quite laborious to perfect.

There’s nothing better than Duke’s gluten free, certified kosher mayonnaise that is rich in omega-3. It has no added sugar thus it is compatible with keto and low card diets. The southern region brand advertises itself as “the only major mayonnaise on the market that contains no sugar.” Duke’s Mayonnaise contain distilled and cider vinegar soya bean oil, salt, water and oleoresin paprika, natural flavours, calcium disodium EDTA added to protect flavour.

All eggs used in Duke’s mayonnaise are pasteurized to destroy illness-causing pathogens like salmonella. Duke’s does not contain any trans-fat and suitable for glucose intolerant consumers.

Duke’s unopened jars of mayonnaise may be stored at room temperature. To protect the great flavour and wholesome ingredients, it is recommended to refrigerate Duke’s Mayonnaise after opening. High temperatures may accelerate loss of fresh and unique flavour. Moreover, excessive heat during storage can result in browning and off flavours, also.

Furthermore, exposure to freezing or near freezing temperatures can change the consistency, texture, and thickness.