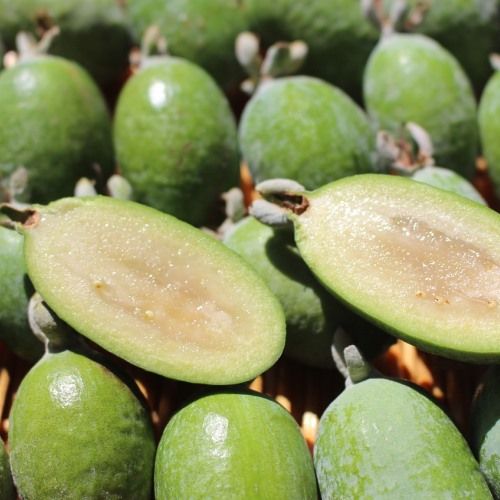 The Feijoa is also known as pineapple guava. An egg-shaped fruit with a thin lime green skin. The flesh inside is cream coloured with a gritty texture. It encases a jelly-like centre closest to that of a pear. The flesh tastes best describes as pineapple, guava or strawberry.

Theoretically, feijoa may be a perfect fruit in the sense that every part is edible. There is no skin to peel, nor seeds to remove. However, most people assume that feijoas must be peeled.

New Zealanders want the world to love feijoas. Feijoas are green gold for New Zealander diaspora. They would do just about anything to get their hands on them. Feijoas are mostly eaten like kiwifruit, another exotic fruit inextricably linked to New Zealand. The fruit is sliced open and scooped out with a spoon. It is common to infusing everything from chocolate to crumbles, ice-cream to vodka with their distinctive, soapy-citrus flavour.

It is true that little feijoa goes a long way. It is surprisingly versatile and used for flavouring, in baking, making confectionery, chutney, smoothie, salads and even used with alcohol. For most New Zealanders imagining life without feijoa is unthinkable.

Feijoa has been embraced in New Zealand with the zeal that obliterates their South American origins. The fruit, as well as its products, are widely popular in Brazil, Argentina, Bolivia in South America and New Zealand and in Oceania. Feijoas are technically ‘available’ in Australia, but invariably in small quantities at exorbitant prices at boutique grocers.

Feijoa plants are an evergreen shrub or small trees. It comes from the highlands of southern Brazil, Uruguay, Paraguay, parts of Columbia and northern Argentina. They are also grown in Russia, Georgia, Iran, New Zealand and Tasmania. In recent times feijoa trees are being planted at a rapid pace in Australia, according to industry leaders, with the majority being planted in Manjimup in Western Australia. However, it is now grown in Queensland hinterland.

Feijoas are low in calories, cholesterol-free, and low fats. The fruit is loaded with vitamins and antioxidants that assures healthy well-being and keeps you free from illnesses. Feijoa is a very rich source of soluble dietary fibre. Hence, it makes a good bulk laxative. The fibre content may help protect the colon mucous membrane by decreasing exposure time to toxins. It also binds to cancer-causing chemicals in the colon. Small feijoas may provide a woman with up to 16% of her daily fibre requirements and a man with 13% of his daily fibre needs.

Feijoa fruits are an excellent source of antioxidant vitamin C. It is known that 100g of fresh fruit may provide more than 32mg of vitamins. It is more than 55% of the daily recommended intake. Vitamin C is a water-soluble antioxidant hence it works will against viral illness. It is an immune-boosting fruit.

Studies show that blood pressure decreases after 12 weeks in feijoa consumption. It also improves control of hyperglycaemia and hyperlipidemia in diabetic patients and reduces the risk of coronary vascular diseases in patients with type 2 diabetes.

The fruit can be used in cocktails, the flowers from the tree can be steeped in hot water to make tea and the fruit’s leaves can be used to smoke food. You may freeze the pulp for use all-year-round uses.

You may eat the fruit fresh from the tree. Simply pick them and eat by cutting the fruit in half and scooping out the flesh with a spoon. Feijoa may be infused with vodka or make any alcoholic cocktails. It is also making delicious fruit drinks on its own or infused with other fruit drinks. Pure feijoa juice is made by Fine Foods which is now available in Australia through a network of distributors.