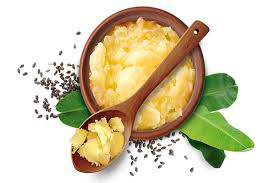 Ghee is made by melting regular butter. The butter separates into liquid fats and milk solids. Once separated, the milk solids are removed, which means that ghee has less lactose than butter. Traditionally, ghee has been used as cooking oil, an ingredient in dishes, and in Ayurveda therapies. Ghee is still used in Ayurvedic massage and as a base for herbal ointments to treat burns and rashes.

Ghee is typically prepared by simmering butter, which is churned from cream, skimming any impurities from the surface, then pouring and retaining the clear liquid fat while discarding the solid residue that has settled to the bottom.

It is easier making ghee at home using regular unsalted butter. Melt the butter slowly and skim off the solids that gather on the surface. Continue to cook the butter until all the milk solids have sunk to the bottom and the liquid is clear. This is clarified butter.

Continue to cook for a few more minutes until the milk solids at the bottom of the pan turn brown. The cooked milk solids give the ghee its flavour and colour. Sieve the liquid into a jar or bottle and let it cool and solidify.

Ghee and butter both derive from cow’s milk, therefore, their nutritional profiles and fat content are very similar. However, because ghee does not contain the same levels of dairy proteins as butter, it may be better for people who do not tolerate dairy products well. While butter is not necessarily bad for health, many people think that ghee might be a more healthful alternative for using in cooking.

A research from 2010 claims ghee contains almost 50 percent saturated fat, which has led to concerns that ghee might increase the risk of coronary artery disease in India. However, a 2018 study looking at 200 people in north India suggests that the fat and cholesterol in the blood was healthier in the people who ate more ghee and less mustard oil as sources of fat in their diets. Results included lower LDL or bad cholesterol levels and higher HDL or good cholesterol levels.

This study compared results between ghee and mustard oil and not butter. Therefore, it shows a promising result for ghee. However, some forms of mustard oil are banned for consumption in the United States, Canada, and Europe because they contain erucic acid.

Since ghee has had many of its dairy proteins removed, it contains much lower levels of dairy proteins, such as casein, and lactose than regular butter. Hence, a person who is sensitive or intolerant to lactose and casein may find that it is beneficial to use ghee as a substitute for butter.

Ghee is rich in a fatty acid called conjugated linoleic acid (CLA), which is known to have a range of health benefits. The 2018 study suggests that dietary CLA is associated with 15 percent lower risk of coronary heart disease. According to another study ghee contains a fatty acid called butyrate acid which plays an essential role in digestive health. It may also have anti-inflammatory effects.

Ghee originates from India however it is widely used in South Asian and Middle Eastern cuisines, religious rituals and traditional medicine.

In reality ghee is another form of butter, and the nutritional profile and fat content of the two are similar. However, ghee may be better for people who are sensitive to lactose and casein because it contains less of both. The texture, colour and taste of ghee depends on the quality of the butter, the milk source used in the process and the duration of time spent boiling.

Neither ghee nor butter is unhealthful when eaten in moderation, and a person can include both foods in a varied and balanced diet.