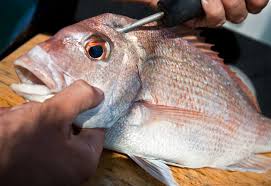 Ike Jime is a process Japanese anglers and chefs use slaughtering fish to maintain the quality of its meat. It is a Japanese fish preparation method that paralyses fish and drains them of blood. Furthermore, disrupting the brain and the spinal cord. Simply Ike Jime is a firm knock on the head or spiking of the brain that will kill fish immediately.

When done correctly, it allows the flesh to develop umami dimension when ages as well as preserves the fish flavour and texture. Ike Jime techniques were developed by Japanese chefs some 350 years ago and the technique has been used ever since. Despite its Japanese origins, more and more chefs around the world have been taking on the technique and using it in interesting ways

It is a simple principle. Time is of the essence. The less trauma a fish suffers before, during and after slaughter the better the quality of the meat. This is because fish produces lactic acid and cortisol when a fish struggles and faces stress. This in turn lowers the meat quality. When disrupting the brain and spinal cord swiftly minimises the stress signals that are sent out.

There are many variations to the methods used. Basic tools are required to kill fish humanely. It is to knock a fish on the head, using a wooden club or ‘priest’ with sufficient weight to render the fish immediately unconscious. Alternatively, ike jime procedure can be done using either a sharp knife, a sharpened screwdriver, or by using specially designed ike jime tools that are becoming available at all good tackle shops. However, there are four basic steps. The objective is that the entire process is done quickly. Expert fish handlers can in fact, finish the entire process in a matter of seconds.

Step 1 is Close the Fish

‘Closing the fish’ is the act of crushing the brain in a humane way. The expert locates the brain, above the fisheye and using a spike to break through the skull. When successful, the fish is said to have ‘shudder’ and its jaw will drop open. It needs to be ensured that this step is done swiftly so the brain does not have a chance to fire stress signals to the rest of its body.

Step 2 is Cut the Gills and Tail

Cutting the gills lets the blood drain out. This is where the main blood vessels are located. Making an incision towards the tail is also vital in locating its central nervous system for the next step.

Step 3 is Severe the Spinal Cord

The fish will tremble as you push a sharp wire into the spinal cord and running the top along the upper side. Once it stops moving, the process is complete. This step is vital as it destroys the nervous system, preventing the fish from sending out more stress signals.

It is said the is not much difference in taste when you cook with or without Ike Jime on the first day itself when it is still fresh. Apparently, the difference comes in on the third, fourth and fifth day of aging. The fish that is prepared by ike jime is still firm, and the flesh is pearly. The one that is not becomes mushy.