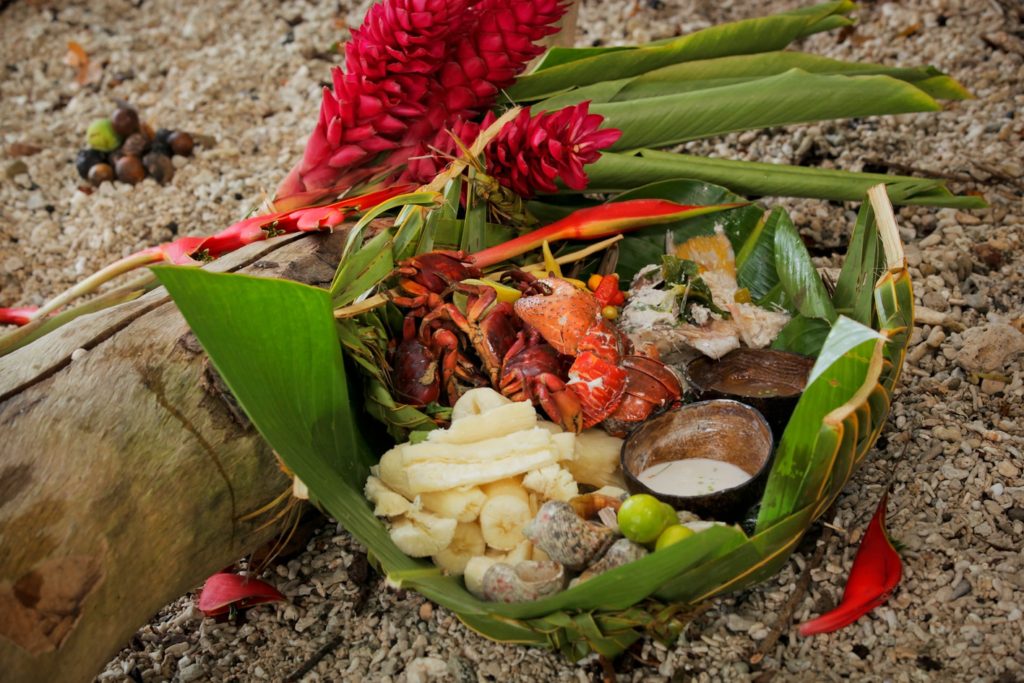 Island foods include cuisines from the Caribbean to the Pacific Island countries. Seafood features in many menus and so does coconut as the coconut palms produce a supply of fruit all year round. Island foods also include chicken, pork and beef which are accompanied with starchy fruit and root crops such as breadfruit, cassava and taro. Spices and ingredients found in the region are used to cook specific island foods. The cooking methods and recipes are distinct and region specific.

Umukai, means ‘food from the oven’ hence the meal is cooked in an oven that has been dug out of the earth called an umu. Coconut cream, salt and onions are mixed together with mashed taro leaves is traditional Polynesian feast that is cooked in umu.

Popular traditional island foods that Cook Islanders love is rori. This is sea cucumber can be eaten either raw or cooked and is usually served with butter, garlic and spice. Ika is a delicacy made up of raw fish that is marinated in lemon juice and is served with onion and coconut cream.

The fishing industry now offers hope for the country, behind the logging industry, which earns more but is slowly decreasing in its revenue. Tuna is soon to take up the lead, as it continues to show a massive increase in revenue compared to the past. The species of tuna caught in the Solomon waters worth millions of dollars are albacore, yellowfin, bigeye and skipjack – the four-main species of interest in the world market.

Samoan food is characterized by the use of coconut milk and cream and regional spices and herbs. Staple island foods are breadfruit, bananas, coconut, fish and shellfish, chicken and pork. Samoan Umu, a traditional above the ground stone oven heated by glowing hot lava rocks is used to cook food.

The traditional Tongan diet consists of taro, yams, bananas, coconuts and of course seafood. Seafood is the staple island foods for any nation. Western influence began in the 19th and early 20th centuries and so did the new food. Tongans began to add onions, cabbage, carrots and tomatoes into their island foods cuisine. Oranges, limes and lemons were introduced, with watermelon being particularly popular.

Fijian traditional food is a wonderful amalgam of fresh, local ingredients found in the tropics. The traditional preparations and cooking methods are passed down the generations. Coconut, fish, rice, taro, sweet potatoes, cassava and breadfruit are the main components in local Fijian dishes.

The national delicacy is ‘Lovo’, that cooks in makeshift underground ovens. It is lined with coconut husks and firewood which are then lit up on fire and covered with river stones. Meats, fish and vegetables wrapped in banana leaves are then placed on top of the heated stones and cooked for about two and a half hours. Duruka, an unusual asparagus-like vegetable that is seasonal during the months of April and May, is also a popular traditional Fijian dish.

Another national delicacy is kokodo, raw mahi mahi (a type of fish) marinated in coconut cream, lime, onions and tomatoes. Coconut cream is an important ingredient in two other Fijian delicacies: Rourou, a dish made of taro leaves, and tavioka, a baked dish made of tapioca and mashed bananas.

With the Indian influence on Fijian traditions there is an abundance and acceptance of traditional Indian cuisines prepared the island style. Local ingredients and spices make delicious goat, lamb, chicken or fish curries accompanied by roti or rice.

Island foods in Fiji are cooked with moderate variation with Chinese and Indian cuisine.

Fish is the staple meat in the Solomon Islands cuisine, especially tuna. Usually any meat is cooked and served with sweet potatoes, rice, taro roots, cassava, taro leaves and many other vegetables.

The national dish of Vanuatu is lap lap. Lap lap is a baked pudding. It is made up of grated yam, banana, manioc, or taro that is mixed with coconut milk and salt, then baked under hot stones.

Vanuatu cuisine incorporates fish, root vegetables such as taro and yams, fruits, and vegetables. Most island families grow food in their gardens, and food shortages are rare. Papayas, pineapples, mangoes, plantains, and sweet potatoes are abundant through much of the year.

It is the region specific cooking recipe and ingredients create the delicious and tasty cuisines.