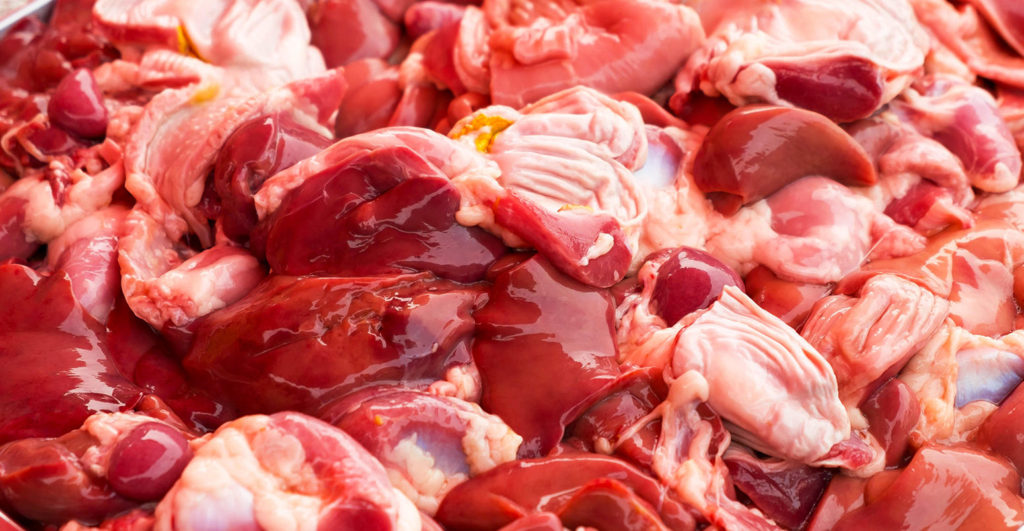 Offal may also be called Variety Meats. It is the name for internal organs and entrails of a butchered animal. Offal may be any of various non- muscular parts of the carcasses of beef and veal, mutton and lamb, and pork. They are either consumed directly as food or used in the production of other foods.

The word does not refer to any particular list of edible organs. It may vary by culture and region; however, it includes most internal organs excluding muscle and bone.

Organ meats were once a cherished and prized food source. Nowadays, the tradition of eating organ meats has slightly fallen out of favour.

In fact, many people have never eaten these parts of an animal and might find the thought of doing so quite disconcerting. However, organ meats are actually quite nutritious. This article takes a detailed look at organ meats and their health effects.

Organ meat includes the heart, kidneys, lungs, liver, intestines and brains. The word, offal can also include tongues, tail and feet. Generally, the word offal means the parts that fall off when the animal is cut up for meat.

Offal is incredibly nutritious and loaded with vitamins, minerals and amino acids that are essential to our health. It is also rich in vitamin B12 and kidneys are lean and also loaded with riboflavin, vitamin B12 and iron. Most offal is nutrient dense than muscle meat.

Even though offal is healthy and nutritious it should not be eaten every day. Eating it once a week is enough. For example, liver is healthy and nutritious, and many essential nutrients. Liver is rich in vitamin A and copper. Heart contains an incredibly unique mix of nutrients that boost stamina and endurance and build muscle. However, eating too much liver may cause problems.

Tripe is a good source of manganese and niacin. It is also an excellent source of absorbable protein and contains an impressive amount of vitamin B12, selenium and zinc.

Organ meats may carry some risks. However, as well as benefits, when they are consumed, despite their nutritional value. There may be issues with harmful bacteria in intestines if not cleaned properly. Liver is high in cholesterol; however, this isn’t an issue for most people. Eating cholesterol rich foods can increase blood cholesterol. Another common issue about eating liver is that it contains toxins despite the fact that liver does not store toxins.

However, cholesterol is produced by your liver, which regulates your body’s cholesterol production according to your dietary cholesterol intake. When you eat cholesterol-rich foods, your liver responds by producing less. Therefore, foods high in cholesterol only have a minor effect on your total blood cholesterol levels

Benefits of Adding Offal to Diet

Offal is excellent source of iron. Meat contains heme iron that is highly bioavailable. It is better absorbed by the body than iron from plant foods. Many studies show that high-protein diets keep you fuller for longer. Hence, it may help reduce appetite and increase feeling of fullness. Organ meats may help retain muscle mass. Offal meat are among the world’s best sources of choline, which is an essential nutrient for brain, muscle and liver health that many people don’t get enough of.