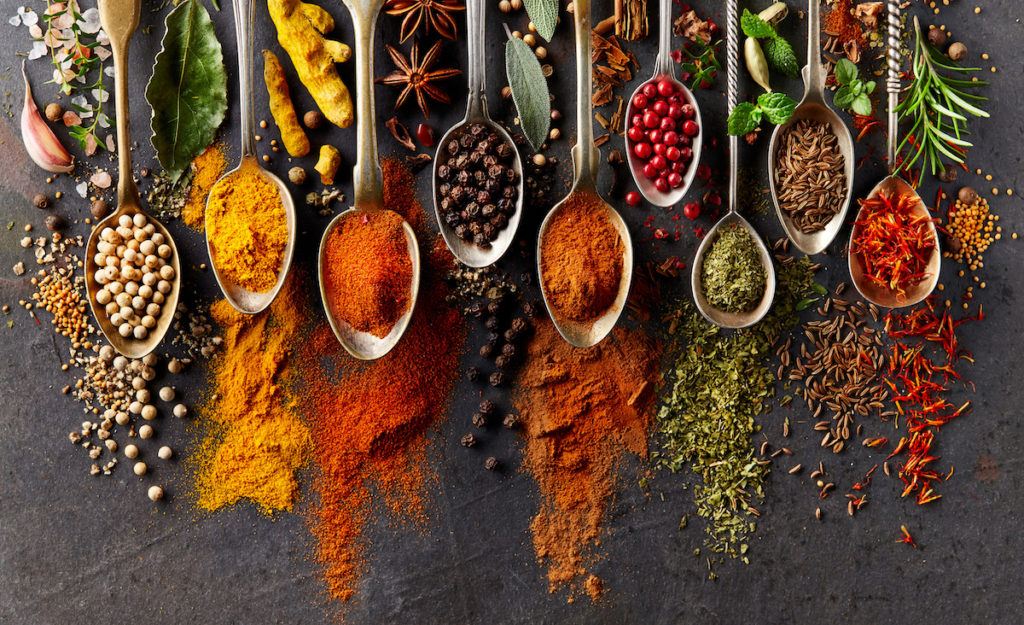 When you cook with spices, it gives you the flexibility to be creative and bold with your recipes. Spices serve many purposes in cooking. It adds flavour, aroma, taste and the best of all spices allow you to eat flavoursome and delicious food. Spices put an end to eating bland food. By adding a range of spices you may transform food ranging from subtle sweetness to rich and spicy hot. Spices also help intensify the taste and colour of food. For example, cumin brings out the natural zest in food while spices like turmeric or paprika give food a deep bright, and appealing colour.

Spices in culinary arts are any dried part of a plant, other than the leaves. Leaves are omitted because the green leafy part of the plant is referred to as herbs. Furthermore, spices are used in dried form while herbs may be used fresh or dried. Every part of the plant along with roots, dried barks, seeds, berries, and twigs other than the green leafy part is considered a spice.

Spices are used for seasoning and flavouring food. However, spices are not used as the main ingredient. Spices are aromatic and full of rich flavour. In addition to flavouring food, spices preserve food and are used as medicines, dyes, and perfumes. Today, India is world-famous for being the largest collection, consumer, and exporter of spices.

Cinnamon is tree bark, cardamon is a seed pod and cloves are dried flower buds. Allspice is a spice that is made from dried berries and is widely used in the Middle East, Latin America, and the Caribbean. It is a versatile spice that may be used flavour desserts, side dishes, and main courses. At times it is also added to beverages.

Turmeric is in root form whereas cumin, coriander, fennel, and dill are seeds. Peppercorns are berries and saffron is also referred to as a spice. Saffron is the stigma that is hand-plucked from a small mauve crocus native to Kashmir.

Culinary professionals mostly recommend buying whole spices and preparing yourself. This is because whole spices retain their aromatic flavours much better than ground spices. However, the reality today is that for convenience people rely on ground spices. Hence having a combination of whole spices and ground forms in small quantities may enable you to use spices quickly. Therefore, it helps you prevent unused spices from languishing in your cabinet and losing their flavour.

For maximum flavour, use whole spices anytime that you can grind your own. You may prepare fresh spices when adding them to your curries, stews, creams, tea, and other infusions.

Toasting the spices like mustard and cumin seeds until they pop, mellows the flavour of whole spices. You may use freshly ground spices when you want to disperse full authentic flavour. These applications may be such as in baked goods and spice rubs. You may also explore frying a mix of various ground spices in oil or ghee to blend up the flavours.

Store the spices that you use often preferably in opaque glass jars and place them in a dark cupboard. You may also store in tins. The spices that you use less frequently can be placed in airtight containers and stored in the freezer. However, you will have to remember to bring frozen spices to room temperature before use. Each time you purchase spices, label them with the purchase date and ensure to give them a sniff every few months to test they are pungent.

Ground spices tend to oxidise more quickly than whole spices because of their large exposed surface area. Thus, they will lose their flavour within a few months. Whole spices can last up to a year.